I Will Travel Rested Now

A roaring traveller. That has been me for far too many seasons.
A crazed, overdriven, tight rope walking maniac, knowing that much was at my fingertips, yet madly unable to feel it regardless of the pressure or the pushing I applied.

No matter where I looked, no mirror could reflect the me I knew to be inside, thick dense shadow marred the view, skewed the reflection. I was lost in suffering and sorrow.

That same mirror gave tragic distinction to the image of God as well, what I have been told about his nature is the wrong shape for the hole he has in his hands and his heart. He is more than they say, he cannot be who they claim... 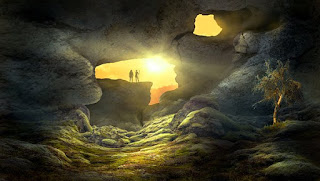 I walked the paths before me, I explored the caves below me.
I even climbed the heights that I may soar the skies above me.
And yet, I have been unable to find that which I searched for:
Me, the me beyond the veil... him, the God behind the stories.
I roar in frustration, for when will I find that which I seek?

Let fear find me; for I will face it with desperation, it is time to know my truths.
Let pain rain down; I will embrace it, it is time to understand my every place.
Let lack be released; I will invite it, for the lower I lay, the higher I have to rise.
I am ready, not to be transformed, but to be unveiled; the layers to be removed, layers that only reflect shadows. The haze found in fire, fire that burns images that hold heaviness of lies and lack endless love.

I journey towards IDENTITY, of my maker and my self.
His heartbeat is a song that I once knew; I will learn the tune again, and I will sing in my own voice.
His face a taste of kindness; I will discover how sweet.
His hands a blanket I am warmed by; I will allow Love to hold me, and share love in my own stitches.
I will find me... as I find him.

Growing up, education was about being drilled with the information at hand, an expectancy to reiterate and duplicate the process was high priority. Memorize, conform, and follow. If you asked a question as to "why", or "how", you would be looked upon as disobedient and unwilling to follow directions. The teachers were always right, it was up to us to only listen and regurgitate when prompted; prompted to give the "right" answer and be praised, or give the "wrong" answer and be disciplined.

The culture of religion I was raised in was basically the same; listen and obey. If you asked a question that put the system and their leaders into a position of feeling unsure or challenged, you were labeled as "rebellious". Questions of "why" or "what about" were quickly brushed under the carpet, or blanketed with confident, yet rust destroyed statements that did nothing but enforce a strict "do not ask, only believe" society. The establishment was also always right, just as my school educators were, and it was up to us within the four walls of "church" to listen and regurgitate when prompted. The "right" answer brought you further up the ladder, while the "wrong" answer had you standing on the ground looking up feeling very alone. Those who made it to the ladder, well, we fondly and oh so humbly looked down to those not yet as "spiritual" as us. Wow, what an idiot I was.

I learned quickly as a child that my questions and desire to look beyond the box brought heartache, that my curiosity and childlike faith was dangerous to my survival. I frequently became chastised by my queries and concerns and found myself feeling torn and confused. In order to lessen the pain, I devised that I would follow blindly—follow wholly, be the white sheep necessary in order to fool the gatekeepers into still feeding and caring for me, even though I was clearly black on the inside. And to be honest, I think it worked. For years I convinced myself that I was doing the "right" things, that I was on the "right" side of the fence, that I was being taught and teaching the "right" messages. There were times when my black wool would show through and I would roar like a lion at the injustice and the foolishness of it all, only to have to zip up my coat quickly and go back to pretending my true colours were really pure and that I belonged in the pen with everyone else.

As I reflect now, I do think I chose the wrong way back then... I should have stood up more to the stick of staunch rhetoric and the whip of expected obedience and suffered more of the consequence than I did. I should have said, "Screw you" more often in protecting myself and looked deeper into the things I thought about, rather than indulge in the sick rotten food being placed before me. I let my stomach be fed with what I knew deep down were lies; I knew that love didn't really look as it was being presented.

I lost my true self somewhere along the way in the attempt to fit in and be accepted, in the attempt to not be beaten by the cruel taskmaster of conformity. Perhaps, had I made my bed differently, I would not have been such a jerk to people in my younger more foolish days—blind as to the depth and realities of life beyond the shadows of authority that haunted me. And perhaps even more, I would have been able to live a life of greater peace and understanding for more than just a few years now.

The lack of freedom to explore my faith, my spirituality, and my whole self, all stemmed from fear. It was fear of a generation that was at the time, being exposed to a lot of new ideas all at once. Fear cultured within a religion that was being taught to fear God; that fear trickled into all the cracks about God and about ourselves. I grew up in fear.

Humanity’s questions that roar like a lion and cower like a lamb within the soul will never go away. Throughout time we have had this innate desire to learn and grow. We have searched to know more, see more, do more, be more... it is in our very nature to adventure and discover. Our eduction systems have changed and we now pursue true understanding, we strive to teach our children to think critically and outside of the any box that tries to grow around them. And yet for some reason, in religions that claim to follow The Christ, too many are still trying to side-step the greatness of questions. Traditional evangelicalism is still dragging its feet and fearing everything that comes to the light. Too many Christians are being led to fear the questions about their beginnings and their ends, to fear the middle middle of their lives; the heart and beautiful depth of why we live.

This is why I broke a few years ago, because the questions took over, the balance of discovery and query were not in sync, and fear was holding each side captive. My middle, my living of life was dying because I was not free to search for what held me here.

Questions lead to knowledge. Knowledge leads to wisdom. Wisdom leads to understanding. Understanding leads to love, and all the qualities that burst from love's bosom. This was a truth I had to understand in order to begin the quest to start thinking for myself, the quest towards rest within.

The journey towards seeing my true self as I see the true heart of God, has created a landslide inside me. I have broken apart everything I thought I knew, deconstructed everything I was taught and was told was right. Turns out, nothing is right. Because "right" doesn't mean anything when you search for truth and freedom in love. Being "right" is just a weapon of mass destruction for a soul on this earth. Love is a healing salve that frees the soul and expands its ability to live in rest.

I don't need to have an answer to a question, as long as there is freedom to ask it and explore its boundaries. I realized, that it's never been about the answers, its been about the shackles.

We all want to understand who we are, where did we come from, and what does the Creator look like. We want to know why we have tragedy and sorrow and why we must endure death. We ask these things and many others because it is in our nature to do so. We were created to be searchers; created to explore.

I am not alone in my attempt to break these things down and solve the universal mysteries that lie within the human heart; nor am I alone in failing. The Buddhist, the Islamic, the Christian nor the Jew, none can answer the fundamental queries that lie within. But one big difference is, some of us are willing to ask the hard stuff, even being ok to not receive the answers, while others will never dare whisper a sentence that ends with a question mark.
at January 18, 2018 No comments: