Food... I'm not the kind of person who is all over food, I basically eat because I have to... but I love to make fabulous food for my family and others to enjoy, because I love them, and they love food! I don't use recipes, I find them restricting and stifling, so instead I use a little INSPIRATION.

Though my mother cooked supper each night and I grew up with family all around who make everything from scratch, though I had a Grandmother who was a chef and catered many events and I was given many skills through each of these beautiful people... I didn't learn the majority of my abilities from any of them; I learned my cooking skills and passion for the kitchen from a man named James Barber - The Urban Peasant.

Everyday I would watch his TV show that aired on CBC, and that same day I would use his techniques, his confidence and his inspiration as my own, experimenting on my family and friends. I can even remember pretending I had my own cooking show, talking to an invisible camera, feeding an invisible TV audience. James had me sitting in complete attention each day ready to absorb all that he gave.

This man was simple and humble, living as himself with no mask or fake TV personality. He was the real deal, I felt so comfortable with him in our home every day through the television, I felt that if I ever were to meet him, he would give me a giant hug and say, "Lets go make something great".
He lived from 1923-2007, a truly great Canadian influence with his passion to show the world how easy it was to dine like a king with only pennies in the pocket; hence the name, Urban Peasant.

James Barber taught me the easiest way to crush garlic, chop an onion and fix a mistake by being quick to remove the barriers of what you are supposed to do and instead do what your gut tells you to do. Start where you are, use what you have, do what you can. He gave me the tools to blend flavours using common sense and enlightened me to the beauty in everyday ingredients all with his carefree charm and big bold smile.

He would take something like chicken and say, "Now, what are we going to do with this chicken?" He would then look around his cupboards and fridge and pull out a whole barrage of items and begin the magic of being inspired. And for me, it was as though he was handing me a key for a lifetime of dreaming through the simplicity of food. I am able to make something from nothing not only in my kitchen, but in my life, and that is in great part because of his true self that he showed on camera and shared with the world.

Something he didn't know, and could never have known, is that I not only learned how to cook because of him, but I learned how to live because of him. He taught me one of the best ingredients that can be found today; an ingredient that is readily available but not always used... INSPIRATION. There's that word again. I walked away from his show everyday with confidence to be inspired by all that surrounded, to create no matter how little I had to work with, to be inspired by the ordinary. With a sprinkle of lessons in humble living that he exuded with each waddle he took to the fridge, each smile he gave to the camera, and the idea that anything can be made extraordinary with inspiration... he changed me.

Something that I recently found out had me giggling and smiling in a sense of wonder. James Barber, The Urban Peasant, was born on March 23... the same day I was. It was another little connection of the soul with the intricate threads woven in my life's tapestry. I am willing to bet that Papa has shared a picture of me with James, to show James the depth his life had on the world; my world. To know we had the same birthday makes me feel I am part of a greater thing, the strands of my life really do add up to become a whole picture.

Besides being gifted with inspiration, and besides being able to see beauty in the little things and make kingdoms out of coal, I can say that the way I see humanity has also been changed in great part because of James, because of my Urban Peasant.

The same way James would see simple oranges, or common garlic, the way he would vivaciously exclaim that they were not ordinary but instead full of robust flavour just waiting to be paired with the right companion, this is the way I see us, the beautiful humans who roam this earth today. Though there are unfortunate hierarchy systems and status levels of poor and rich, skinny and overweight, ugly and pretty, gay or straight... (the list of division just rages rampant)... I am choosing to live with eyes that do not see anyone as greater or different, but instead as equal and unique.  I don't want to see some people as common and others as more valuable, I want to see all of us as unique ingredients that when inspiration meets us, we can create exquisite flavours that bring joy to the world around us, creating an environment that more people will want to experience; perhaps they will want to sit at our table and dine with us.

I desire a world where we can each see the true self within and outwardly, and becomes inspired to live that out fully. That we would live simply and humbly together, all hearts united to create a better place for those who will follow us for generations to come. Those who are homeless, those who are ill, the ones who are struggling with mental illness... they are part of this beautiful world, they are family and they are no different than those of us who do not carry those burdens... those of us who have our own burdens to bear, burdens of different natures but with the same heavy weight. There is no us and them, we are the same, only different in our sufferings.

Each of us is a unique ingredient within the great kitchen of life and we need unite on the kitchen counter, out of the cupboard and blend together in harmony with the understanding that inspiration will absolutely without a doubt... create a beautiful thing upon the metaphorical table.

Thank you James. Thank you for sharing your true self with us, with me. Our world is a better place because of you. 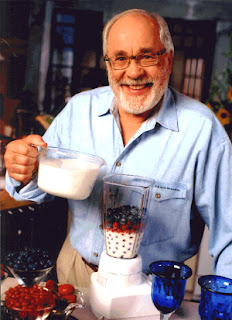